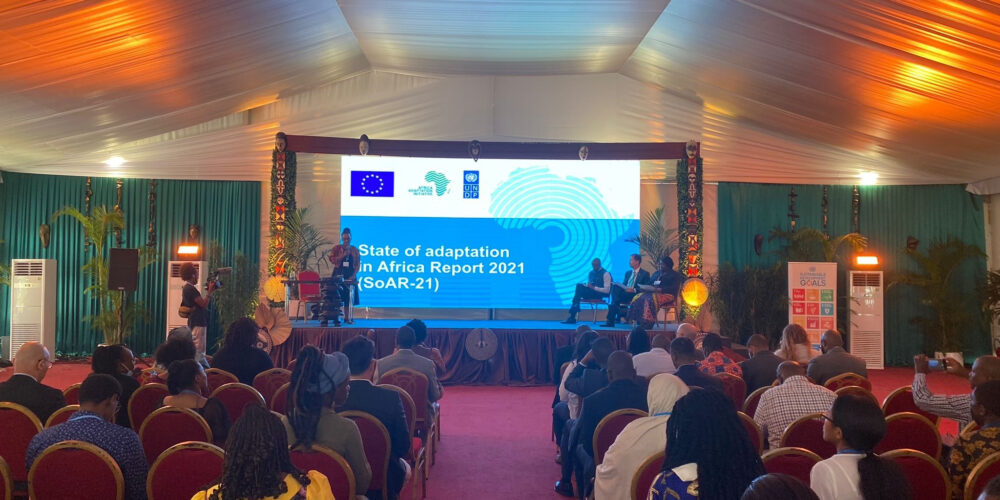 September 2022 - The Africa Climate Week held in Libreville had almost an electrifying atmosphere with over 2,000 participants coming together for the week. With the COP27 less than 60 days away, Africa Climate Week was an important forum for the 54 African nations to convene and unify the continental voice on the urgency of climate implementation. The overarching message of this climate week was, ‘no more commitments, the time for implementation is now.’

Africa has contributed the least to the global climate crisis and accounts for less than 4 percent of global greenhouse gas emissions. Yet, climate change is one of the greatest challenges to the continent – it’s a threat multiplier. Achieving the Africa Agenda 2063 will require African countries to rapidly accelerate their implementation of adaptation plans in line with their Nationally Determined Contributions (NDC), National Adaptation Plans (NAPs), and Sustainable Development Goals (SDGs).

The Africa Adaptation Initiative (AAI) was present at the Africa Climate Week and hosted a session in the Action Hub on, “The State of Adaptation Report (SoAR) in Africa: Preliminary findings.” The session was well attended with over 100 attendees. There was a great buzz around the initial findings of the forthcoming report that has been developed for Africans, and by Africans to inform policy, negotiations, and implementation in the African context.

The AAI session presented key findings on climate financing. Between 2014 and 2018, adaptation-related finance committed by bilateral and multilateral funders to African countries remained well below US$ 5.5 billion per year, well below the estimated climate adaptation costs in Africa. This represents roughly US$ 5 per person per year. It is projected that in this decade, the continent will need US$ 57.5 billion per year to implement its NDCs.

The Report’s findings found that agriculture productivity growth in Africa has been reduced by 34 percent since 1961 due to climate change. Private sector engagement has been demonstrated in countries like Uganda, Ethiopia, Tanzania, and Mozambique through innovative financing instruments that use concessional debt, insurance and liquidity, and credit guarantee schemes to fund adaptation in the agricultural sector.

There is a need for continued action on advancing the African Continental Free Trade Area (AfCFTA). If fully implemented by African countries, AfCFTA has the potential to boost the agricultural sector’s contribution to adaptation in Africa through trade. This will require that countries develop infrastructure and invest in digital technology that increases connectivity, particularly for SMEs that are looking to access regional markets.

The Report recommended that governments should work with their development partners to prepare Africa’s workforce for a digital transformation and guarantee social protection for innovative business risk-taking. Governments need to remove barriers to innovation that prevent smaller firms from competing in the digital space by tapping into the use of digital sandboxes that have been trialed in countries, such as Nigeria and Rwanda.

The vision of the SoAR is that it will act as a report on par with the IPCC but be targeted for African nations, policymakers, and negotiators to utilize. The report has been under development for the

past two years with support from the UNDP and with funding from the European Union. From the beginning, UNDP has been a proud partner and supporter of AAI and has throughout the years provided policy advice, and financial and technical support and served as its interim Secretariat. The report introduces catalytic solutions to crowdfunding for climate action, and risk transfer tools, and provides links with key thought leaders, who can help in preparing bankable adaptation proposals.

Closing remarks were graced by the presence of two Ministers. Mr. Keriako Tobiko from the Ministry of Environment and Forestry in Kenya and Ms. Beatrice Anywar Atim from the Ministry of Water and Environment in Uganda shared a very important message with everyone. The continent has dealt with the loss of water, land, biodiversity, and human life due to climate change, and no region in Africa has been untouched by the climate crisis. She urged participants to remember that Africa also has an abundance of natural resources, a variety of landscapes, and wildlife and is home to some of the World’s Wonders, like no other continent on the planet. Countries need to build resilience to safeguard their resources and people from the impacts of climate change.

The Africa Adaptation Initiative (AAI) – The State of Adaptation Report in Africa session was held at the Africa Climate Week on Tuesday, 30 August in the Action Hub. The session was moderated by the Special Advisor to AAI, Kulthoum Omari. The opening remarks were delivered by UNDP’s Resident Representative in Gabon, Francis James, and Seyni Nafo – AAI Technical Coordinator. The lead author of the State of Adaptation Report Adeyemi Freitas delivered a presentation of the initial findings at the event. For more information about the Africa Adaptation Initiative and to follow the forthcoming report, please visit https://africaadaptationinitiative.org/.